Latest #SaferCarsForAfrica crash test results give cause for serious concern

The three models tested, the Steed 5 pick up from Great Wall, the Haval H1 five door SUV and the Kwid five door compact from Renault, all gave serious cause for concern with poor levels of adult and child protection. Alarmingly the zero rated Great Wall Steed 5 demonstrated a high probability of life threatening injury.

"Another zero star rated ‘Bakkie’ gives us very serious cause for concern in our latest crash test results for Africa. The potential for life threatening injury in the Steed 5 follows the zero star performance of the Nissan Hardbody pick up. The contrast between the marketing claims for such vehicles and the reality of their poor safety performance could not be more stark."

"This is a worrying set of results for the safety of both adult and child occupants in these popular African cars. Our second #SaferCarsforAfrica zero rating in the 'Bakkie' category, with the high probability of life threatening injury, should be ringing alarm bells for any consumer considering the purchase of a Steed 5 pick up.

"From our global perspective, with successful crash test programmes in India and Latin America, we can track the varying safety equipment specifications for cars manufactured in one market and sold in others. It’s therefore surprising to note that the Renault Kwid developed for Latin America, based on the original Indian version, has a better adult and child occupant protection performance, includes standard ISOFIX anchorages as well as dual front and side airbags."

"I concur with both Ale and David that these results are worrisome and cause for concern. Since the #SaferCarsForAfrica programme's first results were launched in 2017 we've been calling for an improvement in the safety standards set by government. These results again confirm the urgent need for this to happen; we simply cannot have unsafe cars on our roads anymore.

"We have spoken to the National Regulator for Compulsory Standards about standards and although the evidence is clear, we are eager to see movement in this regard. Action is needed, and needed now because it's about protecting South African citizens." 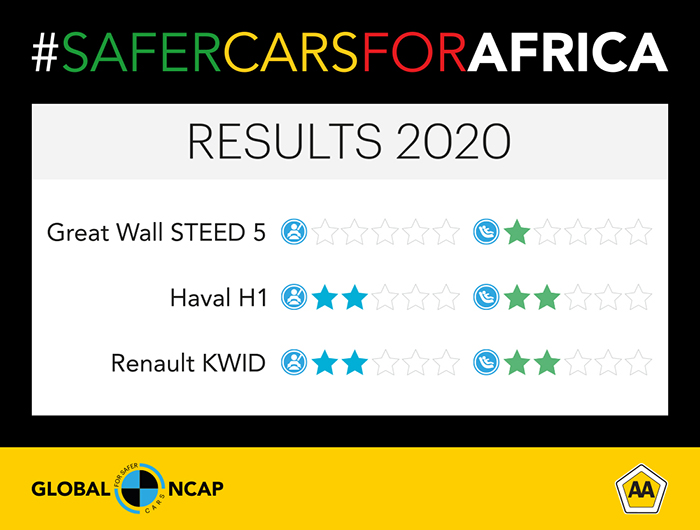 Pick ups, also known as ‘Bakkies’ are a popular category of vehicle in Africa. Following the 2018 crash test of the Nissan NP300 Hardbody, Global NCAP selected the Great Wall Steed 5, which competes on price with the Nissan in the pick up category.

The Steed 5 is tested in the basic version without airbags. Driver dummy readings showed a red head and brown chest and neck, which translates into poor protection for head and weak protection for neck and chest. Those body parts are considered critical body regions. The structure was considered as unstable as was the footwell area. The deformation in the passenger compartment and movement of the steering column questions if an airbag would be able to prevent serious injuries to the driver.

As the manufacturer decided not to recommend a Child Restraint System (CRS) for the test, zero points were awarded for the child occupant dynamic assessment score. The three year old dummy CRS broke during the impact due to the poor performance of the restrain system. The Steed 5 does not have ISOFIX anchorages for the child seats in the rear and lacks three point belts in all seating positions.

The Renault Kwid was tested by Global NCAP when it was launched in India in 2016 and its structure has since been improved. A version manufactured in Brazil was later tested by Latin NCAP where it achieved 3 stars, with side body airbags added to frontal airbags and ABS.

Child occupant protection was negatively affected because the manufacturer refused to indicate a CRS for use in the test bringing dynamic points to zero. The CRS selected by Global NCAP used the ISOFIX anchorages available in the car. Both child dummies heads contacted the car during the test threatening the safety of the child occupants. Lack of proper ISOFIX markings and the lack of a passenger airbag disabling switch resulted in a two star child occupant protection rating for the H1.

Global NCAP awards a separate child safety rating to each car in order to highlight the different levels of protection vehicles provide to child passengers on the rear seats. Global NCAP tests a CRS recommended by the vehicle manufacturer. Because the only safe way for young children to travel is properly restrained in a child seat, the assessment checks how compatible the car is with the child seats, as well as crash protection. Only one of the vehicles tested offers ISOFIX as standard which is a major concern knowing the major advantages of this feature.

The #SaferCarsForAfrica Campaign was launched by Global NCAP in 2017 with the objective of promoting safer vehicles across the continent of Africa.

Global NCAP is a major programme of the Towards Zero Foundation, a UK based charity working internationally in support of the UN Decade of Action for Road Safety, with a goal of halving road deaths and serious injuries by 2030.

The Towards Zero Foundation has consultative status with the UN (ECOSOC), is a member of the UN Road Safety Collaboration and the Bloomberg Philanthropies Initiative for Global Road Safety, is an NGO accredited by the Commonwealth and an observer at the UN World Forum for Harmonisation of Vehicle Standards.

The Automobile Association (AA) has been the trusted champion of the South African motorist and traveller for over 85 years. Along with our AA Accredited Sales Agents located countrywide, the AA offers access to over 50 benefits on 1 card as well as other travel and mobility services that extend far beyond 24-hour roadside assistance - from technical and legal advice, to emergency rescue services, roadside security and a mobile app suite. The AA offers specialised apprenticeships to help motor industry players build in-house skill, and short skill courses for individuals.

About the FIA Foundation

The FIA Foundation is an independent UK registered charity which supports an international programme of activities promoting road safety, the environment and sustainable mobility. Our aim is to ensure ‘Safe, Clean, Fair and Green’ mobility for all, playing a part to ensure a sustainable future through:

- promoting research, disseminating the results of research and providing information in any matters of public interest which include road safety, automobile technology, the protection and preservation of human life and public health, transport and public mobility and the protection of the environment;

- and promoting improvement in the safety of motor sport, and of drivers, passengers, pedestrians and other road users which works globally to promote safe, clean fair and green mobility.

Bloomberg Philanthropies works in more than 120 countries around the world to ensure better, longer lives for the greatest number of people. The organization focuses on five key areas for creating lasting change: Arts, Education, Environment, Government Innovation and Public Health. Bloomberg Philanthropies encompasses all of Michael R. Bloomberg’s charitable activities, including his foundation and his personal giving.